Gregory Ashe Oct 12, 2021 Gregory Ashe
Only days have passed since Vie Eliot’s murderous half-brother—a dangerous, out-of-control psychic—was stopped from killing the people Vie loves most, but Vie is ready for his life to return to normal. He has plans. Big plans. Make the cross country team, pick up his grades, and spend a lot of time with his boyfriend.On the day of cross country tryouts, though, Vie finds one of the teachers dead—and Vie refuses to believe that the death was a suicide. As he searches for the killer, or killers, he discovers that a conspiracy exists in the small town of Vehpese: a conspiracy that might be older and deeper than Vie first suspects, a conspiracy of drugs and human trafficking that might also be tied, in some way Vie can’t quite understand, to his own abilities—and to the other psychic abilities in his town. When the murderers turn their attention to Vie, though, he discovers that his powers might not be up to the task. He faces ghosts, ancient monsters, and even an evil substitute teacher, but unless he can confront his past, and the trauma that lies there, he might not manage to save the people he cares about.He might not even survive himself. 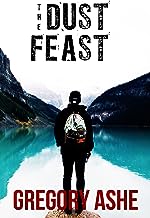