Gary Clayton Anderson,George Utley,University Press Audiobooks Oct 12, 2021 Gary Clayton Anderson,George Utley,University Press Audiobooks
This is not your grandfather’s history of Texas. Portraying 19th-century Texas as a cauldron of racist violence, Gary Clayton Anderson shows that the ethnic warfare dominating the Texas frontier can best be described as ethnic cleansing. The Conquest of Texas is the story of the struggle between Anglos and Indians for land. Anderson tells how Scotch-Irish settlers clashed with farming tribes and then challenged the Comanches and Kiowas for their hunting grounds. Next, the decade-long conflict with Mexico merged with war against Indians. For fifty years Texas remained in a virtual state of war. Piercing the very heart of Lone Star mythology, Anderson tells how the Texas government encouraged the Texas Rangers to annihilate Indian villages, including women and children. This policy of terror succeeded: by the 1870s, Indians had been driven from central and western Texas. By confronting head-on the romanticized version of Texas history that made heroes out of Houston, Lamar, and Baylor, Anderson helps us understand that the history of the Lone Star state is darker and more complex than the mythmakers allowed. The book is published by University of Oklahoma Press. The audiobook is published by University Press Audiobooks. “A powerful and accurate volume that should become an essential additon to the library of anyone serious about the Texas past.” (Montana: The Magazine of Western History) “One of the most important books on Texas history ever written.” (Fort Worth Weekly) 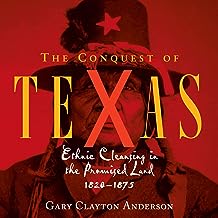